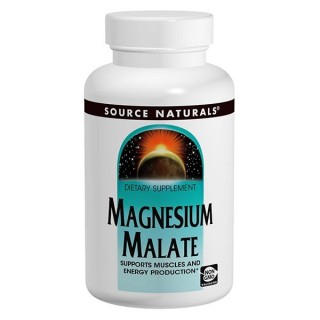 Magnesium Malate is a compound of magnesium and malic acid, clinically shown to soothe and energize muscle cells.† Malic acid is a natural fruit acid that is present in most cells in the body and is an important component of numerous enzymes key to ATP synthesis and energy production.

Magnesium is an essential mineral in over 300 enzymatic reactions in metabolism. These reactions include those involved in the Krebs cycle (one of the body's main energy production processes), energy storage, the breakdown of fatty acids, protein synthesis, DNA metabolism, neurotransmitter activity, and hormone regulation. Magnesium is stored primarily in the bones and plays a role in the absorption of calcium by the bones.

Magnesium Malate is a highly absorbable form of magnesium that provides the benefits of this mineral, along with the benefits of malic acid, a nutrient found to contribute to the process of transforming food into ATP, the body's energy source. Malic acid is a metabolite in the Krebs cycle, as mentioned above, which is responsible for the biochemical reactions that produce 90 percent of the energy in the cells of the body.

This compound is most highly esteemed for helping to:

Malic acid is known to cross the blood-brain barrier and bind to aluminum, helping to draw this metal away from a particular enzyme so magnesium can plug into the receptor sites instead, supporting nerve cell growth and communication. The harmful aluminum can now be flushed out of the brain and the body.

The cause of fibromyalgia is not fully understood. However, some leading fibromyalgia researchers believe that there is a malfunction in the body's ability to manufacture energy. The muscles burn energy faster than it can be produced, which is compounded by a shortage of the nutrients necessary to make the energy. This may cause the muscles to rely too heavily on the inefficient (anaerobic) energy cycle for much of their energy production instead of the more efficient (aerobic) energy cycle.

Malic acid plays a key role in the production of energy in the cells; therefore, along with magnesium it support energy levels for those with fibromyalgia and chronic fatigue syndrome.†

Studies have indicated that those with fibromyalgia tend to have decreased levels of magnesium and other minerals in comparison to the control groups 1. According to a study published in the Journal of Nutritional Medicine (Abraham, et al) hypothesized that a magnesium deficiency found in muscles cells could possibly play a role in the development of fibromyalgia. The group demonstrated that a daily supplement of 300-600 of malate acid resulted in improvements of symptoms, as well as in the number and severity of tender points.†

Magnesium is an essential mineral in over 300 enzymatic reactions in metabolism. These reactions include those involved in the Krebs cycle (one of the body's energy production systems), such as:

Suggested Use: 2 to 6 capsules daily

Note: If you are pregnant, may become pregnant, or breastfeeding, consult your healthcare professional before using this product.

Do not use if either tamper-evident seal is broken or missing. Keep out of the reach of children.