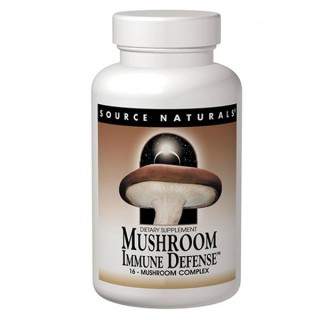 Mushroom Immune Defense™ features 16 of the best-studied species of health-supportive mushrooms, including shiitake, reishi, and maitake. These mushrooms contain compounds, including beta-glucans, glycoproteins and polysaccharides, which support a wide range of immune defenses.

Researchers propose that constituents of these mushrooms may support Natural Killer (NK) cell, T-cell, macrophage activity, and cytokine production all of which are necessary for proper immune function.†

How Do Mushrooms Work?

Mushrooms are a treasure trove of bioactive compounds, but most of their immunomodulating activities have been attributed to polysaccharides (long-chain, simple sugars) and glycoproteins (polysaccharides naturally associated with proteins). These compounds activate a variety of immune responses.

Beta-glucan is a complex sugar (polysaccharide) derived from the cell wall of baker’s yeast, oat and barley fiber, and many mushrooms. Beta-glucans bind to receptor sites on macrophages and neutrophils, which are part of the immune system’s first line of defense. This nutrient has been widely researched for its immune-supportive properties.

The immune system is a complex network of specialized tissues, organs, cells, and biochemicals.

Innate immunity is present at birth and provides the first line of defense. The skin, mucus secretions, and stomach acidity are examples of innate immunity. Adaptive immunity is acquired later in life, and includes elements such as antigens that generate antibodies, or white blood cells, T-cells, and B-cells. Amazingly, the adaptive immune system retains a memory of all its activities.

Remember, a focus on immune support can pay tremendous dividends for your entire life. If you are dedicated to good health you want a powerful formula on your side, such as Mushroom Immune Defense.

Suggested Use: 1 to 2 tablets a day in between meals.

Note: If you are pregnant, may become pregnant, or breastfeeding, consult your healthcare professional before using this product.

Do not use if either tamper-evident seal is broken or missing. Keep out of the reach of children.