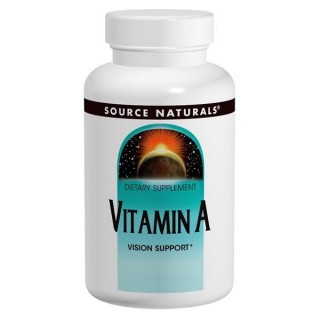 Vitamin A helps promote healthy surface linings of the eyes, as well as the respiratory, urinary, and intestinal tracts.

What is Vitamin A?

Vitamin A was the first fat-soluble vitamin to be discovered in the early 1900’s. It is also known as "Preformed Vitamin A" and "retinol", a name used in reference of this nutrient's function involving the pigments in the retina of the eye. Retinol (Preformed Vitamin A) only occurs in foods of animal origin, while fruits and vegetables contain certain carotenoids known as "Provitamin A".

Vitamin A has several important functions in the body, including the maintenance of proper vision. When the body is deficient in Vitamin A, the eye gradually loses its ability to adapt to changes in light resulting in "Night Blindness." Another vital role of Vitamin A concerns the formation, maintenance, and growth of skin, which forms the body's primary barrier to infection.

Vitamin A helps promote healthy surface linings of the eyes, as well as the respiratory, urinary, and intestinal tracts. When these linings break down, it can become easier for bacteria to enter the body and cause infections. It can also help the skin and mucous membranes function as a barrier to bacteria and viruses.

Vitamin A has been shown to play an important role in various bodily functions:

Additionally, Vitamin A is known as an antioxidant. Antioxidants are known to help protect cells from damage caused by unstable substances called free radicals. Free radicals are believed to contribute to certain chronic diseases and play a role in the degenerative disease processes seen in aging.†

Vitamin A and Immunity

Modern lifestyles do not always reflect healthy choices and can include poor eating habits, stress, lack of exercise, and environmental chemical exposure. With these types of assaults on a daily basis, it is easy to see how our immune systems can become compromised.

Symptoms of poor immunity can include:

According to PubMed, "Vitamin A and its metabolites are immune enhancers that have been shown to potentiate antibody responses to T cell-dependent antigens, increase lymphocyte proliferation responses to antigens and mitogens, inhibit apoptosis, and restore the integrity and function of mucosal surfaces. Vitamin A and related retinoids may have potential applications in therapy for some infectious diseases." 1

Vitamin A deficiency may occur after chronic lack of adequate amounts of Vitamin A or beta-carotene. Taking the RDA level of a nutrient should help prevent a deficiency; however, certain circumstances may require an individual to take higher doses of Vitamin A. For example, consumption of alcoholic beverages, taking certain medications such as birth control pills, and those that seize bile production.†

Vitamin A can also help the skin and mucous membranes function as a barrier to bacteria and viruses. The PDR for Nutritional Supplements states, “Vitamin A deficiency results in decreased resistance to infection.”

A deficiency of Vitamin A can result in:

Those who are malnourished, chronically ill, or recovering from surgery or other injuries may need additional supplementation as well. Other conditions that can impair Vitamin A balance include chronic diarrhea, cystic fibrosis, and kidney disease. Please note: Any supplementation for these conditions should be discussed with a healthcare provider.

Other Uses for Vitamin A

Vitamin A is thought to help hormone glands make adequate amounts of progesterone, which is certainly important for women with estrogen dominance and uterine fibroids caused by this particular hormonal imbalance. Additionally, Vitamin A properties can help protect the integrity of the mucosal lining of the reproductive tract.†

Heavy menstrual bleeding can be a significant problem for women, especially for those with uterine fibroids and endometriosis. This is the most common reason for hysterectomies. Susan M. Lark, M.D., states that, “in a study of 71 women with excessive bleeding, the women were found to have significantly lower blood levels of vitamin A than the normal population. Almost 90 percent of the women studied returned to a normal bleeding pattern after two weeks of Vitamin A treatment. Please consult with a healthcare provider to help you determine an appropriate dose for you.

Heavy bleeding is common amongst those with uterine fibroids and/or hormone imbalances. For many, this type of blood loss can cause one to become anemic. Taking Vitamin A (10,000 IU per day) and an iron supplement together has been reported to help overcome iron deficiency more effectively than iron supplements alone. Adding B-vitamins to this regimen can also be beneficial because they help build red blood cells, which is an important factor when addressing an anemic condition.

Safety of Vitamin A

Generally, signs of toxicity are associated with long-term, excess consumption of Vitamin A. There is evidence that some populations may be more susceptible to toxicity at lower doses, including the elderly, chronic alcohol users, and some people with a genetic predisposition to high cholesterol. In January 2001, the Food and Nutrition Board (FNB) of the Institute of Medicine set the tolerable upper level of Vitamin A intake for adults at 3,000 mcg (10,000 IU)/day of preformed vitamin A.

Do not use if tamper-evident seal is broken or missing. Keep out of reach of children.

Suggested Use - Vitamin A

Warning: Women who are pregnant, may become pregnant, or breastfeeding, take only 1/2 tablet daily: do not exceed a total intake of 5,000 IU of preformed Vitamin A (palmitate) daily and consult your healthcare professional before using this product. Those taking a prenatal vitamin should take this dosage into account if taking additional Vitamin A to be sure the limit is not exceeded.